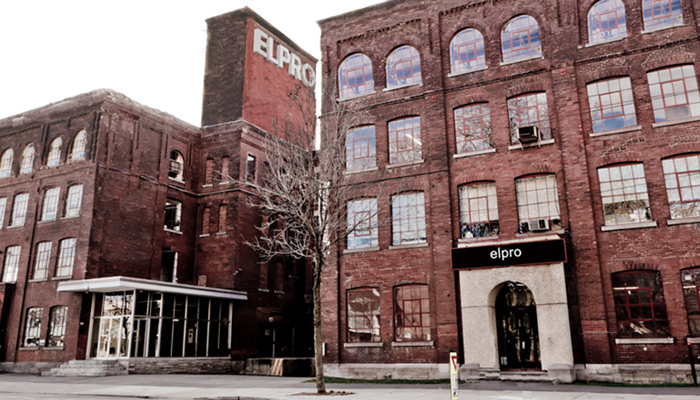 Around 1895, a prominent Quebec architect, Ludger Lumieux, designed what is now the Elpro building. Lumieux also designed several notable structures in St-Henri and is best known for the Atwater market and the St-Henri fire station.

Its proximity to the Lachine Canal and rail transport has made St-Henri an attractive place for manufacturers. The Tooke brothers, who made shirts and collars, opened in the 1890s and created more than 600 jobs.

St-Henri never fully recovered from the depression of the 1930s. The Tooke brothers decided to move their business to Cap-de-la Madeleine allowing another shirt manufacturer, Grover, to open its doors.

In May 2012, Elpro International Inc. closed after 60 years of business.

The Elpro building has been transformed into a commercial loft . The exposed bricks, original wood floors and high ceilings, are all features that highlight its exceptional heritage value, and character.

St-Henri goes through a renaissance and quickly becomes a neighborhood with a promising future.

Located near the city center and surrounded by services, the Elpro building is the ideal place to build your business.